Contrary to popular belief, moles are often present in grub-free lawns. Moles get the vast majority of their dietary needs from earthworms.

Control: Moles can be effectively controlled using our Talpirid Mole management program. The Talpirid baiting application works as an antagonist to the molesâ€™ high energy demands. Moles typically die in their tunnels where they naturally decompose.

Voles are often confused with Moles, so how do you tell which creature made the mess in your yard?

Voles are small chunky rodents with short tails, a cousin of the field mouse. These animals will flee on their own to a new food source above ground once the snow has melted, but the damage can be significant. Over the winter months, they create long runways under the snow. As the temperatures warm up and the grass starts growing,Â use good cultural practices so the damaged area will fill back in with healthy turf.

Moles, on the other hand, will not leave your lawn unless forced out. Moles feed on bugs and worms. Earthworms are their major diet of choice.

Please call our office at 734-453-1219 for further information and pricing on Mole and Vole control.

How To Control Moles PDF 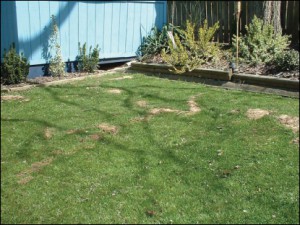 An example of Mole damage

An example of Vole damage