You must properly identify which insect is causing the problem in your lawn before applying any insect control product. Many insecticides target only one specific pest.  The best action is to enlist the help of a professional; call Mr. Green Lawncare Corporation for expert advice!

European chafer larvae are found in lawns without irrigation, and Japanese beetle larvae are found on irrigated turf.  Both types of grubs feed from the beginning of August until late October.  By the end of October, they are fully gown, and both species look almost identical.  Grubs will spend the winter entrenched in the soil.  When the ground warms up in the spring, they will resume feeding and can cause damage from the time the grass turns green until they pupate in the month of May.  Grub damage will appear in home lawns from late August to November, or from March to late May depending on Michigan weather conditions.

Preventative grub control provides protection against the next generation of grubs and is usually applied in June or July.  If you previously had grub damage then you may want to consider a preventive grub control this season.  Healthy lawns can sustain a grub population of five or more grubs per square foot without damage.  For the healthiest roots, mow at 3.5 to 4 inches in height and fertilize regularly.  It is important to know that grub control products will not completely eradicate grubs from your lawn; they will control or reduce the grub population to a manageable level so there is no visible damage.  All products are intended for control purposes only.

Curative insecticide treatments are short-lived applications that kill all stages of the grubs.

These treatments are applied when grubs are found in the fall, or the spring before June.

A tiny, fast-moving insect, hard to find.  At maturity, they are about ¼ inch long. These pests favor full sun, well-drained sandy soils, and thick thatch layers. Chinch bug infestation is most common during hot, dry weather.  They damage the foliage by sucking the juice from the grass blades.

Sod webworm is the larvae of moths and they chew on the turfgrass above ground.  Usually, we notice the moths flying up from the turf first.  Sod webworms feed above the soil on the foliage of the lawn. They hide in the thatch layer in their web-lined tunnels.

A subterranean webworm of caterpillar pests known as Cranberry Girdler has been found in our service area over the past few years.  The larvae are opaque (almost clear) with a copper colored head.  Larvae prefer cool-season grasses, such as Kentucky bluegrass, bentgrass and fine-leaf fescues.  The pest is more difficult to detect and control than other sod webworms because it typically feeds at or below the thatch layer.  Peak turfgrass injury occurs in late summer and early fall.  Heavy larvae infestations can devastate a lawn quickly. 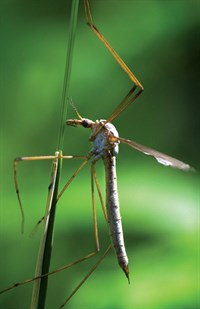 Recent news that European craneflies have been identified in Michigan has been confirmed in our service area.  The adult cranefly looks like a giant mosquito with a wingspan of more than an inch.  The larvae, called leatherjackets, grow to become nearly an inch-long and look like a brown caterpillar with no head or legs.  Cranefly larvae attack cool-season turfgrasses both above ground by causing thinning as they graze on foliage and below ground as they prune at the turfgrass root system. Outbreaks are favorable in humid conditions and they prefer moist soil.

Ant mounding generally reaches a peak and in late June and ant activity slowly tapers through July and August to levels about 1/2 to 1/3 of what you see in June.  The best treatments for reducing ant mounding are insecticides in early June.  However, if you did not use one of these products earlier, you can still make applications through August in areas where you are having a problem.  Treating surrounding turf too will slow the rate at which the ant recolonizes.

Blister Beetles are not turf-damaging, however, they release a caustic substance when crushed that can cause blister and welts on the skin.  The adult beetle is usually ¾ of an inch long and elongated. They vary in color from black to brown with or without stripes, and possess a characteristic constricted neck.  Keep children and pets away from these!

Mr. Green Lawncare offers applications to keep fleas and ticks under control. We apply a long-lasting, residual type treatment for protection against fleas and ticks in the turfgrass.

The Cicada Wasp, a very large wasp, has begun to show up in our service area recently.  They dig their burrows in sandy, bare, well-drained soil exposed to full sunlight.  Over the years, we have seen many nests built along the turf perimeter, especially if recently edged to expose dirt.  If you have been plagued with cicada wasps, we recommend you edge in early spring and late fall only.